The UK Government, it seems, is up to the old racist tricks that have occupied Western administrations since the dawn of eugenics. A report claims that UK aid money is being used to fund forcible sterilisation of Indian women.

Three things occur to me. The first is to ask whether Indian politicians learnt nothing from the Emergency, when coerced sterilisation was a major factor in bringing down Indira Gandhi’s first administration at the conclusion of the Emergency in 1977.

The second is the shocking sexism, if not misogyny, visited on young and mostly poor women. It doesn’t take medical training to see that during a vasectomy you don’t have to invade the body further than the scrotum; but to sterilise a woman involves breaching then stitching the abdominal wall, almost certainly leading to infection when conditions are unhygienic. This, again, fuelled the anger of the Emergency.

The third consideration concerns ethnicity. In the newscast embedded above, I didn’t see any women in burqas, only saris. Whereas during the Emergency Rukhsana Sultana (right) demanded 300 sterilisation certificates from a group of Muslims who petitioned her to stop their houses being demolished, I wonder if the then-minority Muslim position that they should take the chance to outbreed Hindus, Sikhs and Christians will assume the status of a war-cry at the hands of Salafites and others of their ilk. 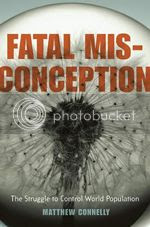 Globally, there is only one dependable contraceptive: rising standards of living. Matthew Connelly reports in Fatal Misconception that when Planned Parenthood went into Central America, they found birth-rates already decreasing because of increasing prosperity. Shrewd management of the riches India already has could easily better the lot of all her children.

But do you think population control only blights faraway lands? Look at the Mail’s sinister headlines today: "NHS…using terminations 'as another form of contraceptive’".