Many acts in Eurovision 2012 that were probably discreetly told not to win because there was no money to stage the 2013 contest, but I’m sure Engelbert Humperdink wasn’t one of them. So it was disappointing to see him come second last – but nobody can say that he didn’t belt it out like a good’un.

There was more Euro-mediocrity than usual, probably because of the aforementioned fiscal diffidence. But Ukraine’s entry was reassuringly nuts, and I hope the Buranovskiye Babushki – the Russian Grannies – manage to rebuild their village church, destroyed by Stalin. Turkey eschewed its usual belly-dancers for a testosterone-charged piece about piracy in what looked unsettlingly like a declaration of intent. 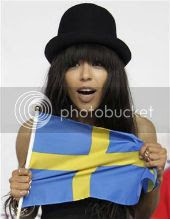 However, Britain’s TV host Graham Norton spoiled this year’s contest for me. Co-host Leyla Alieva had been good enough to go up to speak to Engelbert in the Green room and ask how he was. Then British fans did the same as those of any other country, ie raised the national flag and cheered. Norton’s summary of the report was, "there’s the British contingent – they sound like a BNP rally".

Norton (left) thus revealed himself as a leftist BBC toadie, totally unlike his predecessor, Sir Terry Wogan. In comparing flag-waving patriots to racist extremists, especially as the Queen’s Diamond Jubilee approaches and Union Jacks proliferate, he himself flies the flag of middle-class internationalism so necessary for success in the contemporary BBC.

Concerning Britain’s ranking, radio Eurovision commentator Ken Bruce (right) hit the nail on the head: "as long as voting for each other’s neighbours goes on, can we do much better than [second place]…the UK must question if it wants to be in the UK in the future".