the acid test: will Lee Rigby's murderers be treated the same as Mohammed Saleem's murderer?

The murder of Mohammed Saleem while he was walking home from his mosque in Birmingham was a callous, cowardly act.

So was the murder of Lee Rigby in Woolwich.

It’s been said Lapshyn is a racist because of his hatred of non-whites, and I have some sympathy for this, especially when I read of the grief of his victim’s family, who say "He did not do anything to deserve this - other than be a Muslim". However, if you ascribe differences between groups of people to culture, not colour, it soon becomes clear that "white" is no more a race than "non-white". And "Muslim", indicating adherence to a religion as diverse as any other, is no more a race than "non-Muslim".

So why is it that news of Pavlo Lapshyn’s trial was – rightly – all over the mainstream media while Adebolajo’s and Adebowale’s is conspicuous by its absence?

The media blackout of the Somalis’ trial is so deep our increasingly prone press is not even commenting on the blackout’s existence. This must only fuel rumours asserting our masters and their media lapdogs have acceded to the view that "Muslim [jihadi] blood is superior to infidel blood". 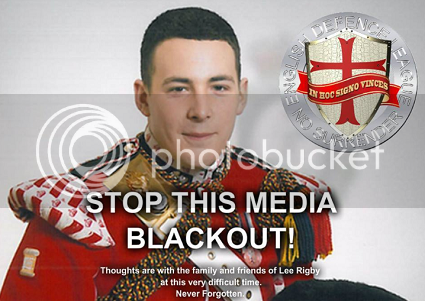 That being said, the blackout is not the most important issue. Pavlo Lapshyn was sentenced to life imprisonment with a tariff of 40 years for his repulsive act. Will Adebolajo and Adebowale receive a similar term for their equally repulsive act, caught on multiple cameras? If they aren’t, surely it would be naïve of the government not to expect those effectively declared as being of lesser worth to react accordingly?