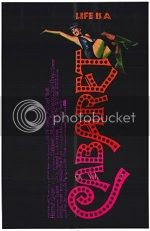 It’s been so long since I’ve seen Cabaret I was really glad BBC1 scheduled it tonight.

I hadn’t left school the last time I saw it. I liked my school, but the history curriculum at the time was abysmal and appears not to have recovered over the decades. So it’s only at this end of a long journey of self-education that I felt able to appreciate the compelling and devastating fable of Germany’s descent into madness.

Michael York plays an overeducated twit who thinks the power of his middle-class contempt will wither the forces of darkness gathered under the swastika, and in this he captures Europe’s mood during the Weimar Republic perfectly. He plays opposite Lisa Minelli, whose talents necessitated changes in the script – in the Broadway original Sally Bowles couldn’t sing. 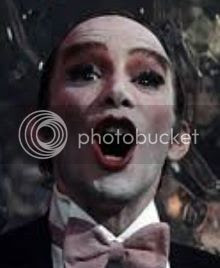 Joel Grey’s Joker-like emcee (left) captures both the cosmopolitan freedom that made 1931 Berlin the citadel the Nazis had to capture, and, as the film moves on, the amoral accommodation with the Nazis that was effected by not just the West in general but also that portion of the German elite that realised that the Nazis wouldn’t be pacified after they’d finished with the communists. And, of course, as we see throughout, with the Jews.

In a sense the Nazis stall rage on, through the Final Solution. Post-Nuremberg this was resurrected by Muhammad Amin al-Husayni, the former Grand Mufti of Jerusalem who’d moved to Berlin 1941 to advise Hitler on the Holocaust and, incredibly, avoided capture as a war criminal. From his new base in Egypt he continued preaching hatred, and many of his followers walked antisemitism right back into Europe.

So it’s fitting that Cabaret ends ambivalently: in the minds of modern Nazis, the last act in their pursuit of Jews – and of every Western freedom – is yet to play out.