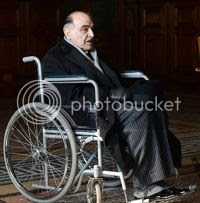 One of the best aspects for me of Hercule Poirot’s apparently needing a wheelchair in ITV’s Curtain – Poirot’s Last Case is that although he is invalid, in the language of the time and for decades afterwards, he is in no way in-valid. His is the obstinate anger of the person who knows his worth, and what’s more of the disabled person who refuses to be perpetually grateful evidence of others’ forebearance and charity.

The issue of invalidity is key to this mystery which, Agatha Christie biographer Laura Thompson tells us, was written in 1940 while Christie was working in a central London hospital during the Blitz. It was by no means certain at that point that Great Britain would be on the war’s winning side, and the Nazis’ ideology of Übermensch and Untermensch come through in a dinner conversation about "unfit lives" and euthanasia, just as the national conversation about whether Hitler was a Good Thing or not would make it into Dorothy L Sayers’ work earlier, when British people at all levels of society were split down the middle on the matter.

Unlike other commentators I see no need to cast aspersion on other screen Poirots in order to praise David Suchet’s definitive interpretation. Albert Finney and Peter Ustinov were exquisite Poirots, and Suchet takes the material and elevates it to those heights of high art that excluded the novels on the grounds that they were readable, ie not literary. With Curtain, Christie gives us literary Poirot and Suchet rises to the challenge wonderfully. We’re still reading Christie almost a century since she started writing, and our descendants also still be watching Suchet’s Poirot a century hence, when it will feel as if it was made for them just as it feels Christie wrote for us.

What made Hercule Poirot perfect - Laura Thompson, The Telegraph, 13 November 2013

Click to read reviews for Agatha Christie: An English Mystery by Laura Thompson

Read more about David Suchet and Poirot at david-suchet.ru