Groomed for sex: not quite all exposed 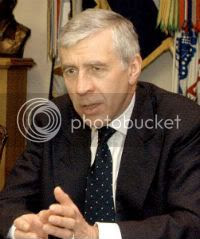 BBC Three has broadcast A groundbreaking documentary about a problem in the North of England with Pakistani men treating white girls as “easy meat”. It was brave of Radio 5 presenter Adil Ray to take on the subject, as the liberal white establishment’s reaction to Jack Straw’s (right) game-changing statement on the matter was to criticise its wording.

Exposed: Groomed for Sex was a complex portrayal of a community in turmoil at its dirty laundry being so luridly aired.

Gangs of Pakistani males of various ages invest months grooming young British girls as young as 12 then, as abusers do, convince them they want a sexual relationship. A disappointment was frequent references to the Pakistani community as "Asians" or "British Asian youth", as if no other religions exist on that continent.

Disappointing, too, that in a vox-pop some youths accused EDL marchers of worsening matters, whereas in reality the English Defence League and Casuals United have put Islam's abuses on everybody’s lips and possibly inspired Straw’s intervention.

Ultimately, this hour-long documentary about Muslims can only be understood in the context of somebody who wasn’t mentioned once: their prophet, Mohammed. Abandoning his life of peace and toleration in Mecca to be worshipped as a warlord in Medina, he married a six-year-old girl. and had sex with her when she reached nine. Mohammed’s actions are key to understanding the behaviour of some Muslims towards young girls, so it’s perhaps disingenuous of Ray to say that "the British Pakistani community have to…separate the law-abiding community from the criminal fraternity" when the latter, seen through the prism of their prophet, are members of the former.

The documentary suggests that sections of the Pakistani community in England are determined to confront grooming. In doing so, they must confront Mohammed. I wish them luck.

Click here to go to the site for Exposed: Groomed for Sex on the BBC Three website
Posted by Joe Daniels at 09:18