Cameron's EU veto drowns in a sea of Titanic metaphors...

To listen to the ongoing media fallout over David Cameron’s use of our EU veto, you’d think the Eurozone wasn’t sinking under red-tape and corruption but rather the weight of Titanic metaphors. In the sea of deckchairs and icebergs, however, Jeremy Vine (right) did come up with two good ones on his show today, summing up the positions of the Conservative and Lib Dem parties by saying that the former had left us as isolated as a passenger refusing to board the fated liner, while the latter believed we should be on the ship trying to guide it away from its nemesis.

However, attempts to paint the Tories as right-wing isolationists and everybody else as wishing to cast their lot in with Europe are simplistic and specious. Europhilia within the Conservative party, shown by Edward Heath when he took us in, was writ large with the "men in grey suits'" political assassination of Margaret Thatcher because of her opposition to Eurocratic ambitions for a superstate.

Left-wing figures like Tony Benn, alternatively, have never disguised their loathing for the EU project, and blogger Shiraz Socialist highlighted the "geriatric Stalinists" who supported calls for a referendum on membership of the EU. Indeed, go into any pub and strike up a conversation with blue-collar Britons – the voters Labour abandoned a generation ago – and you’ll hear criticisms of EU policies like those regarding fishing, agriculture and diversity that would make David Cameron look like Sarkozy’s and Merkel’s love-child.

Okay, I surrender: the Eurozone is like the Titanic. As it sinks, we should try to provide humanitarian aid if we are asked. But that doesn’t include climbing on the damn thing and sinking with it. This is something David Cameron understands, I believe, and something that will win a badly-needed lifebelt: votes from the many tired of EU fascism. 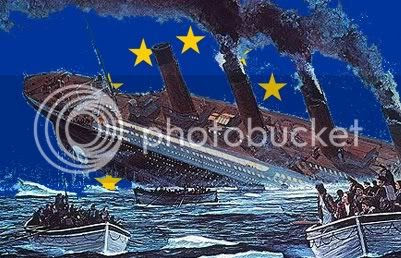