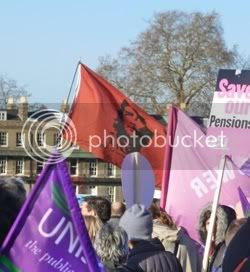 If you read only the Cambridge Evening News, you might think that the public-sector strike spread nothing but joy and enlightenment with no inconvenience.

Its first six pages were filled with breathless appreciation of the walkouts that was negligently partisan. Only on page 6 was there any hint of opposition to the strikes in Cambridgeshire, in the “no” section of a debate article, and in a "vox-pop" section of comments on the online forum, with three comments for and three against.

Compare this with coverage on Monday 11 June of the English Defence League march in Cambridge that took place on Saturday 9, much of which has disappeared from the paper’s online archive. There was a similar amount of coverage, with the difference that the editorial article was brought into the fray, stating that the EDL were "not welcome to return", despite the fact that the 200-strong demo was far less disruptive than yesterday’s 4000-strong march and rally.

The prejudice is owed to the paper’s allegiance to the old view of class consciousness, the socialist dogma that workers can only transcend their lot when they become aware of their chains. Demonstrators’ sinister devotion to spreading their view of class consciousness was revealed when, according to the News, "Janette Evely, a teacher at St Philip’s Primary School in Vinery Way, Cambridge, was accompanied by some of her pupils."

Polly Toynbee's recent BBC documentary about class consciousness rued its demise with plummy-voiced obsequies, failing to consider that class consciousness hasn’t faded: Labour’s betrayal of its blue-collar voting base forced its evolution. And my evolved class-conscious analysis of the strikes is this – why should I demand to pay more tax so a bunch of middle-class activists who earn more than I ever will can get a pension I can only dream of?