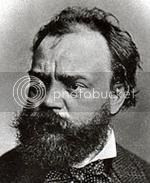 You never forget your first. This applies to all sorts of things, not least music. My first classical record was the one on which so many people brought up in an environment where the genre was virtually unknown cut their teeth: Dvořák’s New World Symphony.

So it was fascinating to see Dvořák mentioned in Symphony, Simon Russell Beale’s exploration of the perennial form that lets composers rip up the programme to let the music bare their souls.

In Dvořák’s time his native Bohemia (now the Czech Republic) was part of the Austro-Hungarian Empire, and the folkish elements in his music – for example the Furiant, a Slavonic dance with a complex time-signature he’d have seen performed in his father’s inn – was looked on with condescension. However, while Wagner’s works were admired by the aristocracy and Vienna’s Musikverein (left) was built for the edification of the middle classes, Dvořák’s nationalist populism fired the patriotic sentiments of his people to whom his music spoke.

I don’t know how well Czech nationalism translates into American nationalism, but patriots can often appreciate the sentiments of their peers from abroad. Thus when Dvořák – now head of New York’s National Conservatory of Music – adapted negro spirituals (such as Swing Low Sweet Chariot), incorporated sentiments of the admittedly Rousseauian fable of Hiawatha and inaugurated rolling passages that would inspire Copland, his New World Symphony (no 7) was a hit. Add to this the two-octave prototype for the walking bass snuck in at the very end of the symphony that would inspire first swing then rock’n’roll, and you have an epoch-making work.

The demotic output of Dvořák’s fecund mind made him, if I may mix art-forms, the Tom Clancy or Peter Robinson of his day. It’s so sad, therefore, that his music is largely dislocated from blue-collar culture. Are we ready for another outbreak of nationalism in musical form?