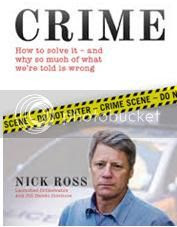 If you’re reading this review of Nick Ross’ Crime: How to solve it – and why so much of what we’re told is wrong, chances are it’s because of the Daily Mail's manufactured furore misquoting that passage about rape.

I don’t agree with 100% of what Ross writes, but would hope that holds true of any thinking person reading any text. Ross deplores rape utterly, and he goes nowhere near the Mail’s recurring theme, based on "evidence" that would never have met his rigorous standards, that women are to blame for being raped; they only have themselves to blame; it’s the victims’ fault.

As an ex-drugs worker I was interested in his positing non-punitive detention for drugs users. I remember the US once imposed this on a man thought (wrongly) to have XDR (extremely drug-resistant) TB. Human rights concerns were raised, and rightly so, but in the face of the prospect of a treatment-resistant illness that evokes fears of horrible suffering these were somewhat restrained.

Ross consistently attacks criminology and its disciples for their determination to blame society for individuals’ criminality at the expense of victims’ needs and anxieties, which I think is seen as his real crime; but he doesn’t let right-wingers, pointing to personal responsibility, off lightly. Chicago’s stock exchange has as many cocaine-users as its poor black areas…guess which ones are easier to catch? By way of his thesis that opportunity to commit crime facilitates its occurrence he cites something close to my heart: the explosion of postal voting.

If you’re angry at what you think Ross has said about rape but haven’t read Crime, I would suggest you’re not quite angry enough to engage your own critical faculties. Buy or borrow Crime, read this ground-breaking text on the causes of and solutions to crime, and make your own decision.

the crimebook.com - an internet supplement to the book

Jill Dando Institute of Security and Crime Science, University College London - co-founded by Ross, dedicated to the memory of his Crimewatch co-presenter; a multi-disciplinary approach to evidence-based solutions to crime