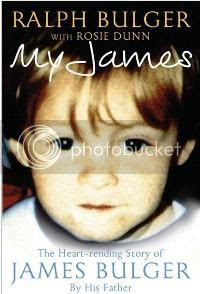 Literally: in Ralph Bulger’s book about his murdered son My James, written with journalist Rosie Dunn, we hear of a man who killed himself in Scotland because people thought he was Jon Venables and were understandably keen to administer the justice that the state sabotaged.

James Bulger’s 1993 murder shocked the world through both its brutality and the age of his killers: ten. John Major was moved to say we needed as a society to "condemn a little more and understand a little less".

Said liberals didn’t listen and arranged for Venables and accomplice Robert Thompson to be given new identities before being released in case adult prison should undo their rehabilitation work. Ralph’s thesis is that they didn’t want to believe such young children could sexually abuse and torture an infant – and they weren't the only ones; when he was eventually allocated counselling (something the killers got without having to beg) the psychiatrist fled, unable to bear what Ralph told him about James’s death.

My James is no academic discussion about crime and punishment; Venables may have fathered a child during his taxpayer-funded new life, and was returned to jail after being found to have accessed sickening child pornography, which is by its nature produced by abusing children.

My James cries out to be read because of Ralph’s heartbreaking insights into the topsy-turvy values produced by ivory-tower liberals who view victims of crime as distractions from their pet projects. Just have tissues and a punchbag to hand.

Click for reviews of My James: the heart-rending story of James Bulger by his father on amazon.co.uk
Posted by Joe Daniels at 21:34