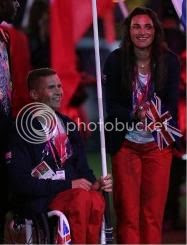 What a relief that the Paralympic closing ceremony managed to avoid the left-wing iconography that Danny Boyle’s Olympic ceremony was guilty of, as British Freedom founder Paul Weston so ably pointed out. Perhaps a lesson learnt, for example, from Boyle’s airbrushing of the Polish WWII refugees who made up 15% of the Empire Windrush’s passengers? It was all very batty and very British, obviously an advantage of being beyond the BBC's dead hand.

The epochal legacy of the 2012 London Paralympic Games will surely be a reimagining of disability. British Paralympians won a total of 34 gold medals, not too far ahead of our Olympians’ tally of 29. However, when you look at the haul of all medals in total the difference is stunning: while Team GB Olympians bagged 65 medals in all, our Paralympians almost doubled that with a breathtaking total of 120 medals. Is this an indication of the reservoir of talent that lies untapped?

The issue of ATOS’ sponsorship of the Paralympic games has been a vexed one, and caused British athletes to hide their branded lanyards in the opening ceremony. When I was on benefits but trying to get back into the job market I found that repeated experiences of failure in several spheres tempted me to retreat into a cocoon of state-funded lack of expectation. I’d have gotten into work quicker if the safety-net had been less, well, safe. On the other hand, disability is a skein of factors with external and internal loci, and in some cases a more robust net will be entirely appropriate to help somebody take their rightful place in society.

During the Paralympics we’ve seen joy, tears, tantrums and accusations. In other words, we’ve seen individuals in all their colours. If appreciation of that individuality by ATOS and wider society is the Paralympics’ legacy, everybody involved can be justifiably proud.

View pics from the Closing Ceremony at the BBC