mob violence vs freedom to offend: which will win?

The scene where Amjad gets punched was expertly set-up and textbook sitcom. It’s just unfortunate that in the first episode of Citizen Khan to portray non-Muslims, a Pakistani man is walloped in a pub called "The George" where the English flag hangs in the background.

Unforseeably, the episode arrived amid a crisis about The Innocence of Muslims, a featurette whose fake beards are admittedly criminal but otherwise contains nothing concerning Mohammed which has not been said by respected Islamic resources.

The film starts in a small US town on the Mexican border; the banners outside are in Arabic and an army officer ponders the prophet’s 61 wives. A murderous gang of Arabs (cue offending beards) come raiding while police look on and await further orders. Then we’re in sixth-century Arabia and have a whistlestop tour of Mohammed’s life which is sickening but accurate - check out the Koran and hadiths. 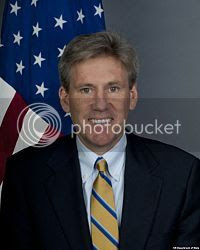 I’d have given the film a miss had not Muslims publicised it worldwide with the murder of Christopher Stevens, the US Ambassador to Libya. Egyptian Prime Minister Hisham Qandil helped rioting mobs turn it into a freedom of speech issue by insisting both that Muslims are peaceful and that people should "pay for what they do" if they insult Islam. Even Tony Blair, arch-acolyte of diversity, has refused to condemn the film.

Salman Rushdie observed that without the freedom to offend, freedom of expression is meaningless. During the furore surrounding The Life of Brian, John Cleese said something similar: "nobody has the right not to be offended". When Islam grows up and stops associating its offence with the loudest voices and the sharpest knives, I’ll start listening to its hurt feelings.

Meanwhile, a scene in Citizen Khan where the title character regrets offending a non-Muslim might start to indicate that cooler heads finally have a voice within British Islam.

The Innocence of Muslims on YouTube: not suitable for young children

US Consulate Attack in Libya: Profile of John Christopher Stevens - The Telegraph