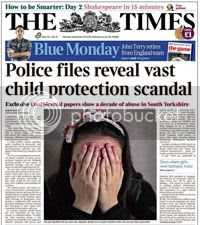 The Times has published an exclusive about how police in South Yorkshire conspire with child protection services to suppress the ethnicity of groomers and child-abusers in Rotherham. It will come to no surprise to members of groups like the English Defence League that the abusers belong mostly to the Pakistani and Iraqi communities.

But while depressingly familiar, one report is stunning in its implications for girls from predominantly white families in this area. The Times report states:

Police went to a house outside which a father was demanding the release of his daughter, who was inside with a group of British Pakistani adults. Officers found the girl, 14, who had been drugged, under a bed. The father and his daughter were arrested for racial harassment and assault respectively. Police left, leaving three men at the house with two more girls.

When a girl can be arrested for racial harassment for having the temerity to be sexually assaulted by members of an untouchable community, aren’t we well on the road to a situation where a woman can be stoned for adultery, which usually consists of having been raped? 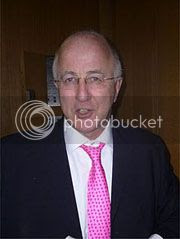 The South Yorkshire Police need to be hit by complaint after complaint; and hopefully Denis MacShane MP (left), who told the Times senior police officers hadn’t "even hinted" at what was going on, will join in. (Although why an MP of a small town was unaware of such a huge scandal needs also to be asked.)

But if by some miracle this is cleared up (and that would be a miracle), it’s set to happen again, because a polished diversity industry continually deflects blame elsewhere, for example on the troubled families the girls come from – something else the Times article explodes. While diversity wraps whole communities in Teflon, none of our children are safe.