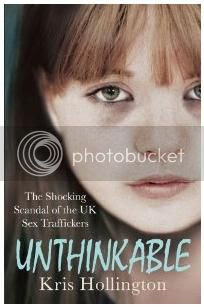 About two-thirds of the book treats grooming and rape of underage children by Muslim, mainly Pakistani-heritage, men. But the first of a series of vignettes interlaced between chapters is from my hero, William T. Stead, whose cutting-edge journalism saw the age of consent raised from 13 to 16 in 1885. Stead quotes a detective lamenting that while abusing 13-year-old girls in brothels "ought to raise hell, it does not even raise the neighbours".

Lessons are lost as generations pass; in 1943, when the countries first specialist venereal disease unit for underage girls was opened, a doctor comments "'we had thought it (the prostitution of children) couldn’t happen here'".

I can understand why: the first time I talked with a woman who’d been so desperate to get crack she’d pimped her daughter (who had went on to become a prostitute) I was reluctant to peer into the existential abyss opening up in front of me. But how did the daughter feel? Read Unthinkable.

The one false note was, I thought, Hollington’s treatment of opponents of the institutionalised denial of child grooming gangs. He refers to the English Defence League as "thugs…some [of whom] have been exposed as violent racists". Karen Downes, mother of the murdered Blackpool teenager Charlene (subject of another vignette) by kebab-shop workers credits us with keeping the Establishment from further covering up Charlene’s death. He also paints Melanie Phillips in a racist light, despite quoting a passage in which she affirms that the vast majority of jailed sex offenders are white.

Hollington exposes how the Establishment’s comprehensive failure to protect vulnerable children from abuse is such a tragedy of errors that "it seems as though a sexual predator has designed the current childcare system". Misreading of patriots apart, I recommend Unthinkable thoroughly.