A growing storm surrounds Kris Hollington’s Unthinkable, an exposé of how denial, prejudice and the law of unintended consequences gone mad over decades perfected conditions for the grooming and rape of girls by predominantly Pakistani abusers.

Following a review by my associate, "Frugal Dougal" pointed out on Amazon that towards the end of the book Hollington undergoes "an intellectual and moral breakdown" in pointing the finger at patriots for doing the very thing he says he wants – getting angry. 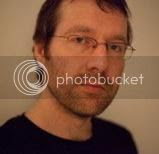 I don’t condemn Mr Hollingworth (right). My associate describes an "existential abyss" resulting from hearing one case of a mother pimping a daughter. Hollingworth has listened to contless tales of grooming, rape (including gang rape) and torture directly from victims, so it’s no surprise if Unthinkable is not only his chronicle of that but also a raw, bleeding part of the author.

Hollington is at pains to point out that the perpetrators are not paedophiles and, of course, he is technically correct. According to the ICD10-10’s sub-Readers Digest shopping lists of symptoms, paedophilia is a preference for sexual activity with prebubescent children.

However, it’s notable that the general public does not enquire whether Jimmy Savile’s victims had developed primary and secondary sexual characteristics at the time of his abuse before labelling him a paedophile, and this is not to be ignored. Neither is the possibility that Hollingworth has been sufficiently traumatised to be suffering a sort of proxy Stockholm syndrome whereby he feels compelled to mitigate the guilt of his interviewees’ abusers.

Of much interest to me was Hollington’s interview of a "hideous man", one of the recruiters, who describes a premeditated, sophisticated syllabus of psychological programming that puts MK Ultra in the shade. This is what our security services need to concentrate on: who ordered brainwashing tolerated on grounds of cultural sensitivity?

Where do we go from here? - Review of Unthinkable on amazon.co.uk, May 2013