don't dismiss Anonymous, their hands are dripping with blood

Reading about the Peasant’s Revolt, in which society flew apart under punitive taxation to pay for cronyism and wars, what struck me was how much historians’ access to events of June 1381 is hampered not by distance, but the deliberate muddling of contemporaneous records. In the age of mass media you don’t need to torch the Savoy to make a point. Considering that in 1955 Rosa Parkes (right) needed only not to rise from her seat to start a cultural revolution that’s still rolling, the fecundity of Gunner Lee Rigby’s martyred blood becomes comprehensible.

You wouldn’t think it to look at the mainstream media, though; press gagging orders seem to be doing the same job Revolt chronicler Thomas Walsingham achieved with misinformation. How else to explain the silence on how the Metropolitan Police forced an unrelated Sikh protest (about Professor Bhullar) between an EDL protest and the UAF counter-protest?

So I don’t believe "hacktivists" Anonymous’ entry is a coincidence. Styling themselves as hidden masters, they say that they’ll target the EDL for trying to segregate Muslims. I wonder if reactionary Establishment forces have brought them in to erase online mentions of our policy of peaceful protest in pursuit of multiculturalism and integration?

Just look at the logo at the end of their message to the EDL: 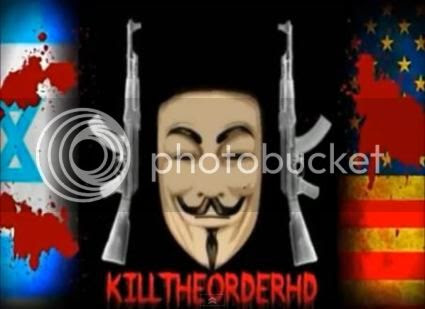 Anonymous and its partners, Lulszec and Wikileaks, are dripping in blood through their manipulation of Arab Spring conflicts. The death-tolls in just two countries affected are 70,000 in Syria, 30,000 in Libya.

Anonymous live by Stalin’s dictum that "one death is a tragedy, one million a statistic". But I hope anybody opposing us who finds a hit-list (because that’s what Anonymous are talking about) in their hand ponders the words of another era's revolutionary, Oliver Cromwell: "I beseech you, in the bowels of Christ, think it possible that you may be mistaken", then researches us while materials are still available.

Sitting Down: the story of Rosa Parks

Sikhs protest for Prof Bhullar, crossfire cleared up by the EDL:

"our minds and consciousness consumed by current scenes in Tunisia, Egypt and Libya" - AnonNews - Everything Anonymous

Click for a review of The Peasants' Revolt: England's Failed Revolution on amazon.co.uk