a valuable addition to a patriot's bookshelf 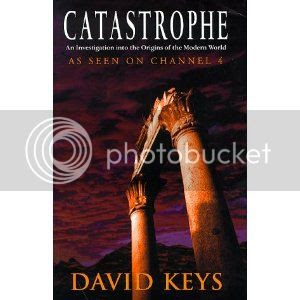 If great natural disasters soften up societies for great changes, then it’s perhaps no coincidence that the so-called Justinian plague stretched from England in the west to the Middle East a generation before Mohammed’s birth.

But what caused the plague?

Catastrophe is David Keys’ 1999 work trying to figure out the conundrum indicated by the introduction’s title: Fifteen Centuries Ago, Something Happened. But what?

Roman historian Procopius provides a lead: for 18 months the sun shone barely brighter than the moon, causing disastrous crop failures. Amid the resulting famines, dynasties fell like houses of cards and whole peoples upped sticks to migrate elsewhere – for example the Avars moved west from Mongolia with devastating consequences for the west after being ousted by their former vassals, the Turks. And crucially, drought conditions in east Africa caused rats to search further afield for food, leading them to take their cargoes of plague-carrying fleas onto trading ships.

Keys relates consequences of 535AD’s cataclysm in central and south America, the far east and Indonesia, exploding the assumption that history is a list of interesting things that happened in countries where European languages are spoken. We gain insights into the birth of England, Ireland, France, Spain, Korea, Japan, China and Indonesia as we know and recognise them.

Although Keys’ treatment on the rise of Islam in the shifting sands of the world order a generation after the incident occupies a relatively short part of his work, I recommend Catastrophe as a welcome addition to any patriot’s bookshelf because of his examinations of the ruinous consequences of mass migration for whole civilisations. We are experiencing a similar scale of migration right now, and earlier this year England’s water supply nearly ran dry. Read Catastrophe for lessons from the medieval world on how it gets worse from here.