Diversity appears simple: people from different backgrounds living in proximity will swap the best parts of each other’s cultures. And I suppose this is possible, when everybody involved has equally good intentions.

But diversity has become twisted from an end in itself into a means to import votes. The lack of incentives to integrate has resulted in whole communities not exactly immigrating but moving their cultures here wholesale.

Amid the chaos caused within the host culture, the misery for people trying to escape those cultures can be overlooked.

Take the Somali athlete Zamzam Mohamed Farah: having been threatened by death for "exposing herself" (below) should she return home, she has claimed asylum in Great Britain. But, should some Somalis intend to make an example of her, where is there for her to escape to in Great Britain, or indeed Europe? 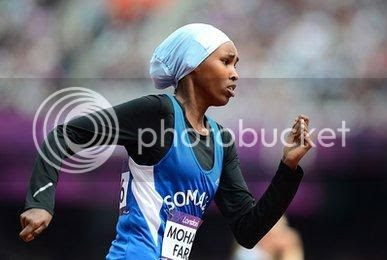 Many within the vast Somali communities in the UK and on the continent want nothing more than to integrate, as is shown, for example, by young Somali girls’ involvement in anti-Female Genital Mutilation projects funded by Integrate Bristol. In an astonishing lack of diversity-mindedness, their community turned against them in defence of the old abusive ways.

If Somalis wish to kill this poor woman, they can count on help wherever there are large Somali communities. Where is there to hide without constant police protection?

Remember equality? It’s the concept that we all stand together as equals under the one legitimate law of the land. It was forged, often painfully, over many centuries from the late Middle Ages onward, and in its inclusivity is effectively the opposite of diversity. If we ever want to return to the time when Great Britain could offer shelter to people who, like Zamzam Mohamed Farah, wish sanctuary from an abusive culture, then equality must again trump diversity.