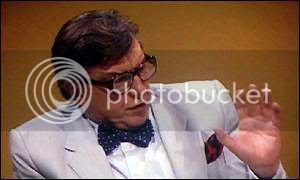 Towards the end of Margaret Thatcher’s premiership, Tony Benn referred to those who had "left their faces in the Falklands", and finally apologised on Question Time when Robin Day (right) – also nearing the end of his tenure – told him of the offence his remark had caused nationally.

How things have changed. During the latest episode, comedian Steve Coogan compared the Government’s NHS reforms to "putting Harold Shipman in charge of your local GP surgery".

The audience laughed; they seemed to appreciate left-wing humour, but I wasn’t laughing, and I’m not even related to any of Shipman’s 215 confirmed victims. There was no attempt by chair David Dimbleby to rebuke Coogan or even indicate that he thought the remark was in bad taste. Would he remain silent if faced with a shot about the effective massacre of up to 1200 people in Stafford Hospital? 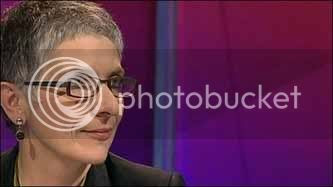 Question Time is recorded shortly before the broadcast unless it’s a live "special", and there were no indications that this was a special. So why wasn’t the remark edited out? The BBC has learnt nothing from when Melanie Phillips gave the nation a heads-up about the Ross and Brand scandal, when the BBC aired a pre-recorded programme featuring obscene messages left on andrew Sachs' answerphone.

You can apply to join the Question Time audience which, since the BBC is the cultural wing of the Labour Party at its most centrist and extends leftwards from there, lends itself to self-selection. If you think you could attend, don’t just sit there: apply!

And/or if you are in the UK, please take check out the remark for yourself – the NHS question starts at 49:45 with an audience-member asking if Andrew Lansley should be taken out and shot, which at least got a reaction from Dimbleby. If you’re unhappy – complain!

Click here to go to the BBC's Complaints page
Posted by Joe Daniels at 21:29