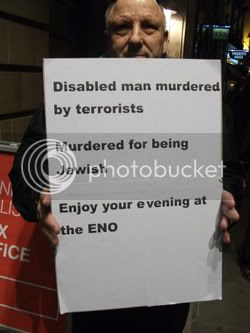 It was a restrained protest, very British: the single protester (who gave me permission to photograph him) carried a placard reminding patrons of the English National Opera that the opera they were attending featured the murder of a disabled Jewish man.

Personally I didn’t find watching the London première of The Death of Klinghoffer a comfortable experience, but a treatment of how the Israeli-Palestinian conflict played out on board the hijacked Achille Lauro is perhaps the wrong place to look for chicken soup. However, Act I is prefaced by the Chorus of the Exiled Palestinians and the Chorus of the Exiled Jews, in a declaration that neither side was going to be demonised – or get an easy ride.

I had expected to feel nothing for the terrorists, but Alice Goodman’s intelligent, harrowing and nuanced libretto got under my skin. When a Palestinian confided to the ship’s captain that his first toy had been, at age 5, a real assault rifle, I found myself wondering "what kind of pig would put a gun in the hands of an infant?" A sequence where an ostensibly motherly woman, all but suffocated in hijab, encourages the young executioner to walk soon in paradise made me question the extent to which he was master of his fate, let alone captain of his soul.

A line that the hijackers had had a chance to awaken "consciences that slept secure" seemed a metaphor for the Kierkegaardian task of disturbing us from slumbers, existential and otherwise, that Goodman and composer John Adams had set themselves. Having thought we would be invited to question where the line is drawn in fighting for what one believes in, I left wondering whether the line is a dream, and The Death of Klinghoffer a wake-up call.

ADDENDUM I stated elsewhere that I left the theatre when during the curtain calls, the enthusiastic applause became rapturous for the actors who played the Palestinians. My own prejudices had gotten the better of me: had I investigated, I would have found that they were making their first appearance in opera. And had I stayed, I would have witnessed the standing ovation for Michaela Martins, who played Leon Klinghoffer's wife and whose performance near the end of the opera as Marylin Klingoffer, hearing of Leon's death, had people crying. I was blinded by my determination that my preconceptions enabled me to see more clearly than those who differ from me. If I had had a little more humility, I might have seen that The Death of Klinghoffer exposed my own hypocrisy as much as, and possibly more than, anybody else's.
Posted by Joe Daniels at 18:00