council prayers: is it time for a crusade?

I would not like to be Malcolm Hey, who walked out of a meeting of Portsmouth City Council last year during a prayer said by an Imam invited by the Lord Mayor.

The Conservative councillor had good reason. He told Asian Image:

Although I am happy to learn about Islam …it is different to participating and worshipping in the religion, the Gods we worship are very, very different.

Christianity is our official religion and, although we have various Muslims in Portsmouth with an immigrant population of about 5% with the Muslim population within that, it doesn’t seem appropriate when the majority call themselves Christian or have an affinity to Christianity.

I am wanting to maintain the status quo. If we start having prayers to Muslims, Buddhists and so on, how long will it be before we allow the Jedi Council to have their part? 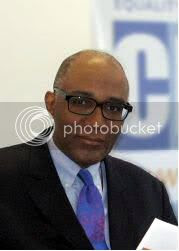 However, actions like those of Mr Hey could be seen as contributing factors to the High Court’s ruling that prayers cannot be lawfully held as a 'formal' part of council meetings. In what the Christian Institute called "an extraordinary judgement" – and head of the Equality Commission head Trevor Phillips (right) called "nonsense on stilts" – the National Secular Society has won its case against Bideford Town Council on the grounds that no councillor is compelled to say prayers.

Unlike Mr Hey, I’m not worried about Buddhists or even Jedi. I’m worried that if Islamist councillors want their prayers they will go ahead and make that happen and nobody will touch them for it: and the law-abiding majority will lose out yet again precisely because they are law-abiding.

Although I’m usually in favour of more direct action, I reckon this situation could be solved by prayer.

How about a prayer crusade? We could meet to pray in council chambers, during meetings.