neocorporatism on the march: the Tube strike is a punishment for democracy

The picture is eloquent: 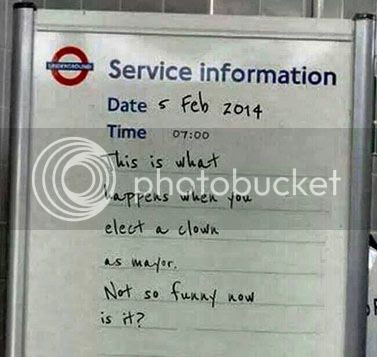 This is what happens when you elect a clown as mayor. Not so funny now, is it?

The seventeen-word manifesto delineates the purpose of the Tube strikes of 5-6 February: punishing citizens of London for using their democratic birthright to elect a Mayor whom TUC high command disapproves of.

Peter Mair and Richard Katz referred to a situation where bodies such as trade unions developing relationships with the state mirrors the relations between the state and political parties. In other words, these bodies – such as unions – determine the direction of the state, supplanting democratically-elected representatives.

Mair and Katz call this situation “neocorporatism”. Given Mussolini identified corporatism as fascism’s political synonym, it’s surely fair to surmise that neo-fascism and neocorporatism can be similarly identified. The unions – in this particular case the RMT and TSSA – are using a 48-hour strike to inform London voters that their democratic choice of mayor is unacceptable to them.

Neocorporatism is the logical next step on from the political cartel formed by our three main parties, who kick the ball to each other every so often to give us plebs an illusion of democracy. The fightback starts when we use our birthright to elect representatives from outwith the cartel.

Changing Models of Party Organization and Party Democracy: The Emergence of the Cartel Party - Richard S. Katz and Peter Mair