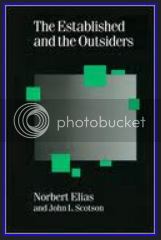 I’m sure Norbert Elias and John Scotson never intended "Winston Parva" to represent the relationship between patriots and super-elites, but as an analysis of power relationships their sociological classic The Established and The Outsiders holds strong in this context.

Winston Parva is the fictionalised village in which the authors identified two classes of people: the Established in the old village, and Outsiders who inhabit the "Estate".

The power differential between Insiders at the centre and Outsiders on the Estate is what they wanted to examine. Power centres, once established, proceed mindlessly upon the Nietzschean task of acquiring more power: witness the neo-imperialistic chequebook held out by George Osbourne to Ukraine while flood victims here, on the UK Establishment’s home ground, appear to occupy at most afterthought status.

Lars B Ohlsson describes in his summary of Insiders and Outsiders the mechanism by which we Outsiders on the Estate – patriots – are kept in our place:

gossip centres and cliché-based judgements, condemnation and discrimination of 'them' while praising and promoting 'us', continually [feeds] the existing order.

Thus we have patriots condemned in general as "racists", "swivel-eyed loons" etc, for no good reason other than these are the present Establishmentarian buzzwords describing political Outsiders – witness Nigel Farage’s treatment in Edinburgh. The most extreme example so far is the removal of foster-children from their guardians on the grounds that "Ukip members might not be suitable foster parents for non-British children".

That UKIP is poised for major gains is due in no small part to the revulsion felt by people of all political persuasions that the Establishment feels parents’ political persuasion is sufficient reason for interventions in family life of the most extreme kind. Come the elections we need to remember that as far as the Establishment is concerned, we’re all outsiders living on the estate.

The Established and The Outsiders - click to read reviews on Amazon

Council admits mistakes over Ukip foster parents storm - Ben Quinn, The Guardian, May 2013 - "The removal of the children caused outrage across the political divide"

How to Spot a Swivel-Eyed Loon - The Guardian, undated