Money Week: The End of Britain 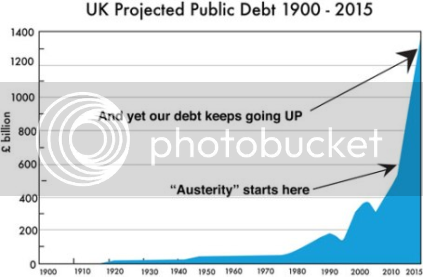 A debt worth 913% of the economy saw the Nazis brought to power in Germany. Great Britain’s debt is currently worth 900% of our economy.

The latest missive from Money Week is undoubtedly an ad for the magazine, but contains many unsettling facts. For example, when Gordon Brown tried to spend his way out of recession, he might have reflected on James Callaghan’s words from 1976:

"We used to think you could spend your way out of recession and increase employment by boosting government spending… I tell you that option no longer exists. And so far as it ever did exist, it only worked on each occasion… by injecting a bigger dose of inflation into the economy, followed by a higher level of unemployment as the next step."

The report looks at the welfare state: in 1909 a pension was offered to all men who reached 70. This was only humane, especially in the light of countless reports published the previous century concerning the effects of poverty. But there were ten workers for every pensioner; to return to this ratio you’d have to start offering the pension to centenarians. And that’s before you think of foreign workers who do help by paying taxes here, but who are also sending large amounts of money out of the country, and others who view benefits as a form of revolutionary tax.

The NHS’s successes are dimmed by tales of corporate massacre on an industrial level. The voices warning Clement Attlee that such an undertaking from war-diminished coffers (such as anthony Weymouth in This Century of Change) have been all but forgotten. (The document mentions the prospect of pensions being nationalised: a friend of mine is unable to get his NHS pension transferred – a glitch, or sign of things to come?)

Whether or not you decide to read Money Week, I recommend you read The End of Britain.

The End of Britain? - Money Week

ukpublicspending.co.uk (referred to in the above text)

All that glitters: hidden secrets of money?