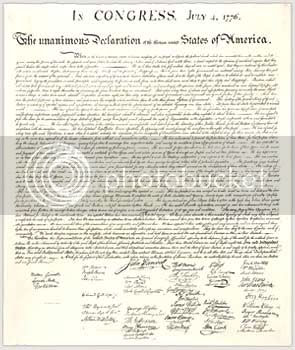 “We hold these truths to be self-evident, that all men are created equal, that they are endowed by their Creator with certain unalienable Rights, that among these are Life, Liberty and the pursuit of Happiness.”

Thus begins the second paragraph of the US Declaration of Independence, distilling in one sentence the essence of Enlightenment thought. It’s not for nothing that the final chapter of Peter Gay ‘s two-volume The Enlightenment, which deals with the founding of the US, is called "The Project in Action".

Norbert Wiley indicates in The Semiotic Self that the signatories might not have seen women, black people and Native Americans being encompassed by the phrase “all men are created equal”. Nevertheless had this concept not been central to US independence we might still have a transatlantic slave trade and women might still be struggling for the vote in much of Europe as well as the US. (Native American rights are, it seems, a work in progress.)

It’s perhaps significant that on the 4th of July 2013 the US Government is exercised by an issue that is splitting traditional polities on left and right: Edward Snowden, who is on the run after leaking details of US agencies’ intelligence-gathering activities. This isn’t news to anybody who remembers Echelon, but is of greater import now that people commit so much of their lives to recordable media. Chicagoan Bonnie Greer, writing for The Telegraph today, suggests that Snowden is the vanguard of a "Libertarian Millenial" movement that transcends Right and Left, or possibly even subsumes them in a Hegelian synthesis.

However the Snowden situation plays out, America remains a beacon of hope to the world, due in no small part to the radical equality in the Declaration of Independence. I hope my American friends and their friends have a happy 4th of July.

Email ThisBlogThis!Share to TwitterShare to FacebookShare to Pinterest
Labels: 300 words, equality, history, us