adoption assessor: "I have noticed you are blonde and blue-eyed"

The above statement was made to a woman who, with her husband, was undergoing assessment by social services to adopt a Guatemalan child. They had wanted to adopt a child in Britain, but were turned down for an interview after stating their ethnicity as "white British".

The Establishment seems to fetishize blonde hair and blue eyes in the way that they don’t, say, brown hair and hazel eyes. True, Hitler envisaged his Master Race as blonde-and-blue, but the quickest look at the top echelons of the Nazi establishment shows these characteristics to have been largely conspicuous by their absence.

Nevertheless, social workers especially seem to suspect people possessing blonde-and-blue to harbour a fascist agenda, which if you speak to them about it equates a socialist state minus even the perfunctory nod to democracy within our present society. This seems to hark back to the "blue-eyes brown-eyes" experiment beloved of diversity votaries, whereby people with brown eyes are invited to imagine the discrimination they would face in a world run by people with blue eyes. 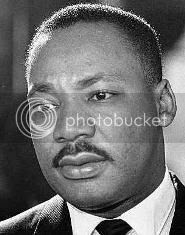 This originated with an experiment US schoolteacher Jane Elliott had her third-grade pupils conduct in 1968, as a one-off, to help them understand the assassination of Dr Martin Luther King (left). In her version, however, the blue-eyes were initially discriminated against by the brown-eyes, and then roles were reversed. But fast-forward to 21st-century Hull Museums and teachers' notes present the experiment so that blue-eyes are exclusively the oppressors, with no reversals - the subtext being that oppressors are always blue-eyed, no matter their appearance.

In the first paragraph, I said that the couple wanted to adopt a child "in Britain" – not necessarily British or white or the other attributes that social-workerish types are programmed to associate with Britain. The types that, I hope, will see their fascist practices challenged by a huge vote for UKIP in the Rotherham by-election on Thursday.

'When I told them we were white British, I was turned down without even being invited for an interview': Family's adoption ordeal at the hands of the 'thought police' - Daily Mail

Blue-Eyes, Brown-Eyes: The Experiment that Shocked the Nation And Turned a Town Against its Most Famous Daughter