If prison should be a place of redemption, as Pope John Paul II said, Nelson Mandela showed that it can be. While there’s been some unsavoury comment on Facebook about his hinterland, there is surely no doubt that he was the decisive factor in enabling South Africa to transition from Apartheid to a fairer way to live.

A friend of mine from the South African diaspora in the UK told me, when Mandela walked free from Robben Island he could have initiated a bloodbath with a wave of his hand. He didn’t. He chose to try and lead his nation down the path of reconciliation. 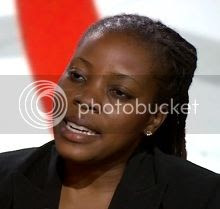 Did he succeed? Only time can tell. There’s certainly a degree of underreporting of the extent to which white people in South Africa can feel embattled. As white left-wing presenters on the BBC’s News at Ten put on their official mourners’ faces, it was left to Johannesburg correspondent Nomsa Maseko (right) to give voice to this embattlement when explaining the strong police presence as the rainbow people, to use Archbishop Desmond Tutu’s phrase, took to the streets to celebrate his life and legacy:

People were worried about what was going to happen…each time Nelson Mandela was hospitalised a lot of South Africans were virtually in the waiting room, except now it was white South Africans saying “please don’t die, because we don’t know what the future is for white South Africans”. Because there is still a belief by some white South Africans that when Mandela goes, which we have now seen here, his long walk to freedom is now ended. What is to happen to them? That is the question that a lot of people are still asking.

Nelson Mandela has fought the good fight and finished the race. May his dream and his legacy be remembered and safeguarded.