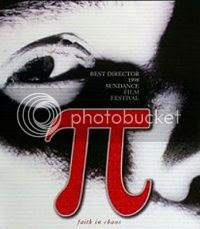 Director Darren Aronofsky doesn’t underplay the paranoid aspect of his 1998 debut Pi: the tagline is "paranioa is faith in a hidden order beyond the visible" – a hook Vigilant Citizen eventually bit on. However, I think the film is a meditation on that classical allegory of painful awakening, The Cave in Plato’s Republic.

The protagonist, Max Cohen, says near both the start and finish of the film that despite his mother’s warning not to look into the sun he did so at the age of six and, after being initially blinded, "something…inside me had changed."

The lesson I took from Pi is the one thinkers of all traditions tend to conclude: the world that brings us joy is the one we walk upon and share with others, but awakening to that world, forever in front of our noses, involves a long and painful journey.

""something…inside me had changed" quote from Pi IMDb

The Republic - Plato, Electronic Classics. The allegories of the sun, the divided line and the cave are from p187 (starting with the section marked Glaucon-Socrates) to p196.

Sun, Divided Line and Cave - J.E. Raven, Cambridge University Press (Jstor/The Classical Quarterly, 1952): an academic article that might be of help in understanding the allegories.

Read reviews of Pi at Amazon