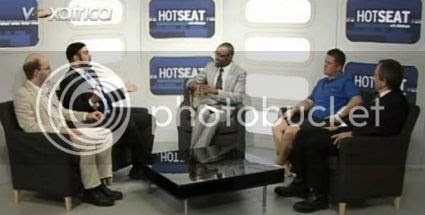 Vox Africa’s recent debate on Islam and terrorism appeared on its flagship programme The Hot Seat, with Akintayo Adetokunbo-edmund chairing in an urbane but assertive manner. 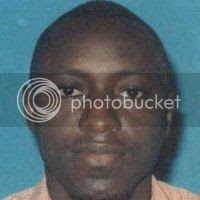 Four participants – Tommy Robinson of the English Defence League, Paul Armstrong of the Association of British Muslims, Abdullah Al Andalusi of the Muslim Debate Initiative and the BNP’s Carlos Cortiglia – initially resembled a lively Question Time or Newsnight panel (except that neither could have hosted this debate because Akintayo (right) is something the BBC doesn’t possess: a genuinely impartial chair).

Then the Muslim Public Affairs Committee’s Raza Nadim joined by phone with a prolonged ad hominem attack on Robinson which Akintayo had to curtail by calling “Raza!” in a raised voice. It was something he had to repeat throughout, and to his credit he never lost his composure in the face of the cleric’s rants.

Armstrong and Al Andalusi are sophisticated European converts to Islam and beneficiaries of 3,000 years of Western culture. So I’m glad Nadim was there to show the pan-African channel’s viewers the uncompromising vehemence with which beard-and-burqa imperialists replace debate, victimising diverse communities which turn to English Defence League as a bulwark and final pressure-valve.

Despite the BNP’s elected politicians, the debate centred around the EDL and its concerns, so that a programme entitled Is Islam was synonymous with terrorism turned to Muslim paedophile gangs. With concerns about, for example, the sale of seven-year-old girls for marriage in Niger (legal under Sharia law), it seems our struggle is the talk of Africa.

Akintayo ended by giving both sides food for thought, reminding Tommy that Nigeria’s Boko Haram kill Muslims as much as Christians; and asking Nadim whether it’s right for Muslims to come to Great Britain from overseas and tell their hosts how to live. I’ll watch The Hot Seat again.

Click here to watch the debate
or watch below:

Is Islam synonymous with Terrorism? Tommy... by EDLrelated
Posted by Joe Daniels at 10:03