Indoctrination? All About History publishes guide to striking 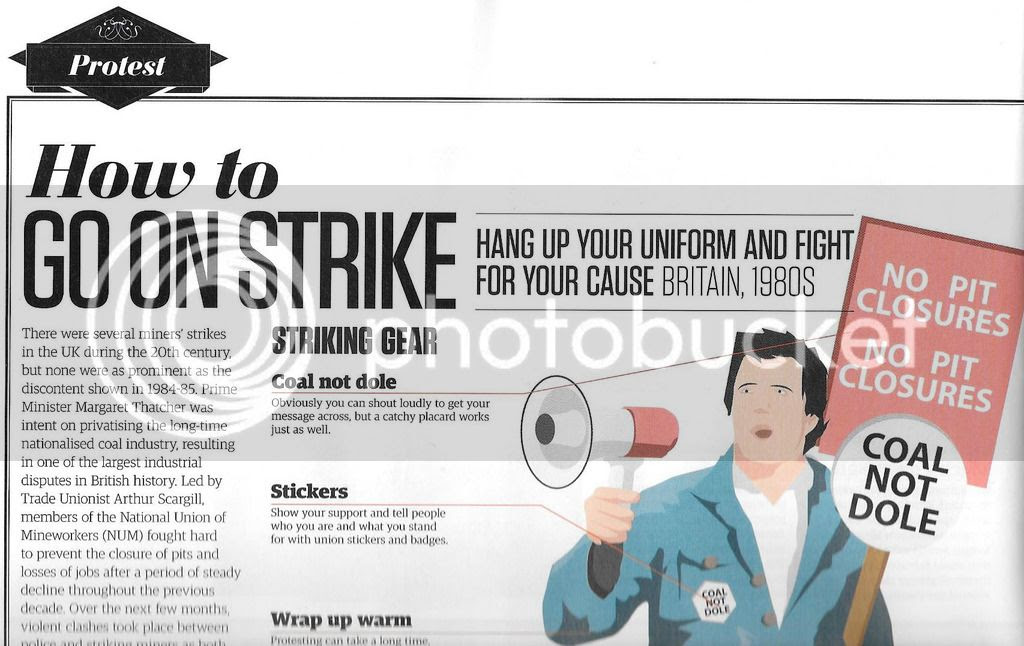 A word can give away so much, and this time the word was “abhorrent”. The word was used by the magazine All about History, saying in a spread entitled Protest across history that the "Red Wedge" of socialist musicians toured the UK in 1987 because of "the abhorrent possibility of a third consecutive Conservative government", in an issue of the magazine timed to come out when many doctors are striking and hard-left unions are pledging to come out in support.

It’s the only point in the feature where an emotive adjective is used to describe the object of protests. Here’s a quick summary of just some of the movements or incidents from the feature that appear not to warrant being described as abhorrent or indeed anything else judgemental:

The next spread deals with How to go on strike and gives a pictorial guide to the Miners’ Strike, although there are several facts missing. The very first window is entitled Hold a Ballot, but although we learn the legalities strikers must observe before going out, there’s no mention that the National Union of Mineworkers(NUM) held two national strike ballots in 1982 and one in 1983 it lost all three, and had to resort to holding ballots on a region-by-region basis and concluding that the activist-enforced victories added up to a mandate for a national strike, which was illegal both under UK laws and the NUM’s own constitution, leading people both within and outwith the NUM to conclude that the strike was more about trying to spark a regime-changing revolution than fighting for admittedly bad pay and conditions. Neither do we get the chance to read that there were 989 coalmines employing 502,000 people in 1964, the year Labour’s Harold Wilson started his first stretch as Prime Minister (with the Tories’ Edward Heath holding the post 1970-74) and 219 mines employing 242,000 people in 1979, when James Callaghan, having taken over following Wilson’s resignation in 1976, lost the election to Margaret Thatcher. Nor, unforgiveably, is there any mention of David Wilkie, the taxi driver murdered by two strikers, Reginald Hancock and Russell Shankland, because he was taking a non-striking miner to work. The only mention of violence is:

Acts of violence could alienate some of your supporters. Getting thrown in jail can help gain sympathy to your cause, but you can’t stand on the picket line when under lock and key.

And on the strike’s end, the magazine counsels:

it is important to know when a battle is lost. Cut your losses and you may return another day to win the war.

Some pages on – and significant given Shadow Chancellor John McDonnell’s chucking Mao’s Little Red Book at Chancellor George Osbourne – is a Lonely Planet-style guide to Maoist China which, while not quite a celebration, mentions that Chinese people "die in their millions" under Mao’s leadership, but leaves out the scale: at least 50 million people, many more than Hitler and Stalin combined. A little later comes an article entitled What if Trotsky had come to power?, which again is not a hagiography, but is remarkable given the Trotskyist tendencies of Labour’s new leader, Jeremy Corbyn, and his followers.

Magazines are often compiled over the course of weeks if not months, but the BMA strike was decided on in mid-November, which would have given politically-skewed personnel ample time to partially clear the decks and produce an overtly political "bookazine", printed on glossy paper and with lots of illustrations, that would be especially attractive to young people (David Butt, Group Managing Director of Imagine Publishing, All About History’s parent group, states the company took on many former Ladybird illustrators").

For this reason, I advise you to buy All About History issue 034 for a rare insight an how the wider educational establishment is presenting a skewed narrative to younger people in order to co-opt them as footsoldiers in the war to right what they perceive as being history’s wrongs.

All about History Issue 34