anti-fracking and the resurgence of Picturesque

Enclosure has a lot to answer for. True, it’s the basis of all that modern people consider private property, but it also established a precedent for a class of people declaring that what was beforehand held in common belongs to them.

Thus, for example, we have the BBC’s cultural enclosure of immigration, the NHS and the causes of climate change, whereby anybody who expresses views beyond the pale is considered toxic.

The anti-fracking camp is closer to enclosure in its original meaning. The means of harvesting oil from shale has brought energy prices down in the US and could do the same here, but protesters won’t have it. They insist the land cannot be used for this purpose.

And there’s the nub. Like the haves of feudal times, the anti-frackers arrogate to themselves the right to determine how our land is used to support the people lucky enough to live upon it. They seem to have an idea that fracking will turn fields of green to fields of concrete, but are blind to barely mitigated immigration doing just that (see cultural enclosure). 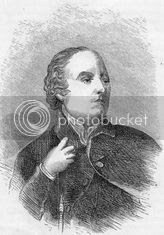 The anti-frackers seem to have a romanticised view of rural land that owes much to William Gilpin's (right) views on the Picturesque – seeing blasted heaths as more attractive than planted ones and ruins easier on the eye than habitations – without realising that Gilpin’s aesthetics concerned art, not life. Add to this the sinister left-wing fetishisation of land as the elite's birthright as pioneered by National Socialism and you have an explosive scenario.

The anti-frackers proceed from the super-privileged who come to lord it over the rest of us. Not only have they no contact with blue-collar life, but enjoy benefits most middle-class people will never see. They seem to think they have ringside seats for a revolution. Perhaps they do.