The European Union may have been officially founded by the Maastricht Treaty in 1991, but the idea has been around for a very long time. In fact, the phrase "The European Union" was first used by Charles Irenée Castel, a former soldier who became a priest and was known as l'Abbé de Saint-Pierre (and gets a mention in Tolstoy's War and Peace).

The European Union, according to Saint-Pierre, would be modelled on the cooperation between the German principalities, which were then effectively, if not formally, as related as England, Wales and Scotland are now. That is to say, in our idiom, it would be a supranational superstate. Saint-Pierre said heads of state would have their authority over their citizens guaranteed, but, right afterwards and in contradiction, he proposed that the Diet (a proto-Brussels) would be the "supreme judge" of its members' rights and that any member breaking a treaty would be treated as a "public enemy".

So there you have it: the European Union in ovo, including the name. The section of the Abbé de Saint-Pierre's book Project pour rendre la paix perpétuelle en Europe first mentioning The European Union is in the photo below, courtesy of the French National Library: 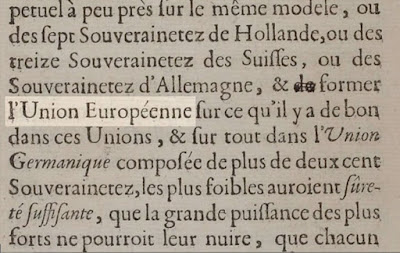 Read more in Brexit and Democracy: Reclaiming full and equal suffrage from the political cartel - out now for Kindle!