Article 50 may be legal, but was Gordon Brown's premiership valid?

Tony Blair may not be telling the whole truth about the reasons for his unhappiness with the British EU referendum result.

When he says Brexiteers "dismissed" the Remain campaign as scaremongering, he seems - seems to be buying into the absolutely toxic stream of thinking that questions the intelligence of people who voted for Brexit. For more of this see today's Times, which beside the usual graphs of what the regional votes were, gives the average percentage of people in that area with 5 or more GCSEs at A-c. One woman interviewed this morning complained that she was "highly educated" and didn't understand the case for Leaving. Are the metropolitan intelligentsia preparing to take us down a slippery slope, similar to one that caused a lot of trouble in the 20th century?

I believe Blair is nervous because of a little-mentioned change to electoral law during his first term. The Representation of the People Act 2000 effectively legalised postal voting on demand by abolishing safeguards built into the Representation of the People Act 1985 (and earlier versions) which stipulated that anybody who wished to vote by post had to give a reason for doing so to the Registration Officer. A House of Commons Library investigation into electoral fraud dates the rise of such fraud to industrial levels to that change.

Jump to the 2005 General Election, and as you can see in the tables below, the number of postal votes cast were a massive 514% of Labour's majority over the Conservative Party, who were the runner up, ie they formed the main Opposition Party. This is in terms of raw numbers and does not take into account our first-past-the-post system, of course, but look at what the raw numbers are: there were 5,500,000 postal votes, and Labour's majority over the Tories was a mere 770,000. (click to enlarge) 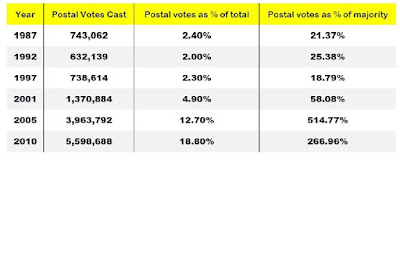 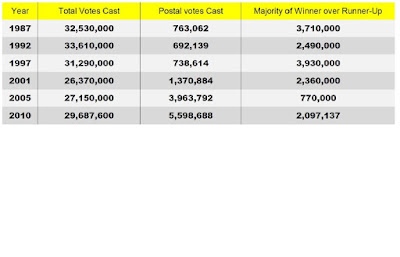 Here's what Judge Richard Mawrey QC had to say about electoral fraud in his famous "banana republic" judgement, delivered two months before the 2005 General Election:

Anybody who has just sat through the case I have just tried and listened to the evidence of electoral fraud that would disgrace a banana republic would find this statement surprising. To assert that ‘the systems already in place to deal with the allegations of electoral fraud are clearly working’ indicates a state not simply of complacency but of denial.

This matters because, after Tony Blair retired, Gordon Brown signed us up to the Lisbon Treaty.

Article 50 of this treaty specifies the procedure to be followed if a country is to secede from the EU. There has been some debate over whether Article 50 is the sole legal way of achieving Brexit. But there may well be another factor to consider here: was Tony Blair's 2005 election win democratically valid? In other words when Gordon Brown signed us up to the Lisbon TReaty, including its Article 50, did he have a legal mandate to represent the people of Great Britain?

Mr Blair - and Mr Brown - have some very interesting times ahead.

Representation of the People Act 2000